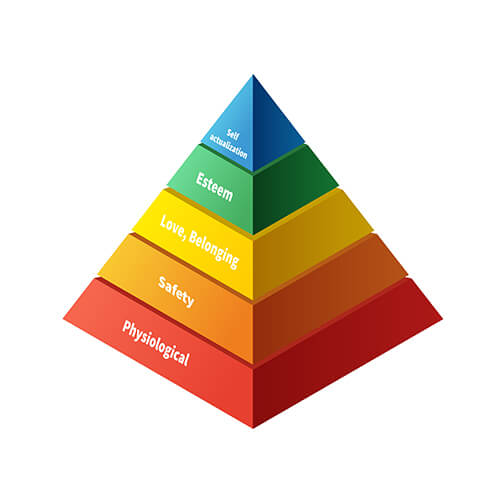 Often through my coaching clients, colleagues and friends, I come across people who are unhappy. Unhappy with their jobs, their partners, their environment. Their lives. It appears that at some point in their lives they have ‘settled’ for something that they weren’t actually aiming for but decided at some point: “This will do”. A colleague of mine years ago chose her partner for life based on the fact that “we know each other, I’m getting older, and I’m not sure if I’m going to find anyone else in time to have kids. This will have to do”. We see it all the time with jobs. People doing roles that pay the bills but leave them deeply unsatisfied and downright unhappy. It doesn’t have to be that way. You don’t have to settle. Don’t settle.

Well, it comes down to Maslow’s Hierarchy of Needs. We have some basic needs: food, shelter and sex. If any of those needs are not being met, we go into ‘survival’ mode. A number of years ago, my contract finished unexpectedly. One minute, I had an amazing, satisfying role managing a large program of work. The next, I was out of work. Even though I had money saved, my first instinct was: “I have to get another job” and, to be honest, a bit of panic: “What if I can’t find one in time?”… “What if I run out of money?” Even though I was highly capable and good at what I did, the fear crept in. In those panicked moments, I’m sure I would have accepted anything just to guarantee my continued shelter and food supply. Fortunately, I did not make any decisions in those moments of panic, and within weeks I had several options of new roles to choose from. We all do it. I’ve seen highly successful people living their dreams, switch to ‘survival’ mode when something happens that threatens their basic needs. It’s simply fear taking over.

Feel the Fear and Do it Anyway

Susan Jeffers, in her book “Feel the Fear and Do it Anyway”, talks about doing things you are afraid to do helps build a muscle, allowing you to take on even more challenging tasks. The thing I love about her advice is she encourages us to literally ‘feel the fear’. Fear is not something to run away from. Jeffers encourages us to examine the fear – why are we feeling it? What could it mean? Negative feelings are not a bad thing. They are simply warning signs that something is up. What is this feeling trying to tell you?

Once you have a better understanding of your fear, the best thing to do is change your physical state. It could be as simple as going outside for a walk, or standing in a power position. I’m a big fan of the ‘Warrior II’ position in yoga or throwing my hands in the air and looking up (seriously, this works – you may get some strange looks in the park but it’s totally worth it). You have already done something. Now do something else. Keep taking steps that move you away from that feeling of fear and away from ‘survival’ into ‘thrival’.

Know that you deserve the very best. Know that many people before you have faced tough adversity and come through it all better than ever. They are human beings just like you. Don’t settle for ‘surviving’ through adversity. Settle for nothing less than coming out bigger and better than before. Know that the power is in your hands. In her book “Thrive”, Arianna Huffington tells us “We all have within us the ability to move from struggle to grace”. And we do. Spend as much time in struggle as you need to understand why you are feeling it. Then move into grace. The power is in your hands.

Since I mentioned two books that inspired me, it almost goes without saying that a wonderful way to move out of ‘survival’ and into ‘thrival’ is to read a book or or listen to someone who inspires you. Whatever it takes. Don’t settle for anything less than amazing.