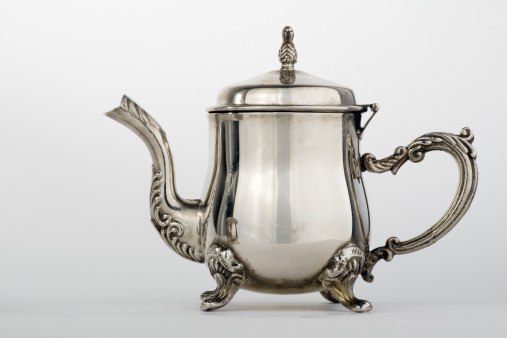 When I was 11 years old, I was innocently going about my business in the kitchen when the silver teapot just LEAPED off the bench. It really did. One minute, it was sitting there, the next it was lying on the floor looking a little worse for wear. I put it back on the bench and tried to bend the lid back into shape with no success. When my father asked what happened, I replied “it fell and it broke” – a true and accurate representation of what had transpired. He was a little cross and didn’t seem to believe in the possibility of the teapot falling all on its own with no assistance. As it turned out, after a bit more patient questioning from my father, I had actually been holding the teapot with the intention of moving it from one bench to the other and I had accidentally dropped it. My father invited me to talk him through what happened and take responsibility for my actions. Instead of “it fell and it broke”, I said “I dropped it and broke it”. Asked if I felt better for taking responsibility, I had to be honest and say I didn’t really, I just felt bad. Okay, maybe a little relieved. It’s now a bit of a joke in the family when something happens to say “it fell”… “it broke” etc as a way of making light of how easy it is for us to not take responsibility for our actions.

A Lesson in taking Responsibility

It was a great life lesson, and I’m so grateful I learned it early in life, because in this fast paced world, it is so easy to blame things that happen on others or events outside my control. Mostly because everything seems to be so complex, with so many moving parts, it’s actually hard for our brains to get around it all. I read an article recently in one of our newspapers in Australia where the journalist told a story of her driving and almost running into a cyclist (I won’t share it here as it is getting way too much unpopular attention already). The way she told the story was that it was all the cyclist’s fault, and she was not to blame at all. Fortunately, no one was hurt but it was close. It got me thinking about the silver teapot. This was not a rant on social media, but a column in one of our major newspapers, read by a lot of people. And this person was completely unable to even question whether she may have had a role to play in the incident.

Responsibility – The Power in your Hands

We’re seeing this a lot, and it makes me sad. Because, if you can develop the skill of simply questioning what role you may have played, you are not only being more self-aware, but an added side effect is that you are giving yourself MORE POWER. Yes, by accepting you played a role in something rather than being a helpless victim, you are telling yourself you have more control than you ever realised. And when you have more control, you are living at cause – taking responsibility for the world around you as opposed to at effect, where everything seems to be happening TO you.

One of my favourite quotes from Spiderman is “With great power comes great responsibility”. I agree. I also think the reverse is true:

Sometimes stuff happens. It rains and the trains are delayed. Someone pulls out in front of you without indicating. You are leaving on time when your cat vomits. You cannot have control over these things, and I get that. But by simply asking: “what was my role in this?” or “what might I have done that could have prevented this?” is sending a strong message to your unconscious mind that you have control. You have have power.

And the cool thing about this is that it doesn’t cost anything. You can ask the question, quietly in your head, and see what comes up. Sometimes, you can rest knowing you are clear of any fault (good for you!) but the answer is not the important thing. It’s the fact you asked in the first place. And THAT’S what makes all the difference.

Have you had a “silver teapot” moment where you may have assigned blame quickly before wondering what your role was? How might things have worked out differently if you had asked first?